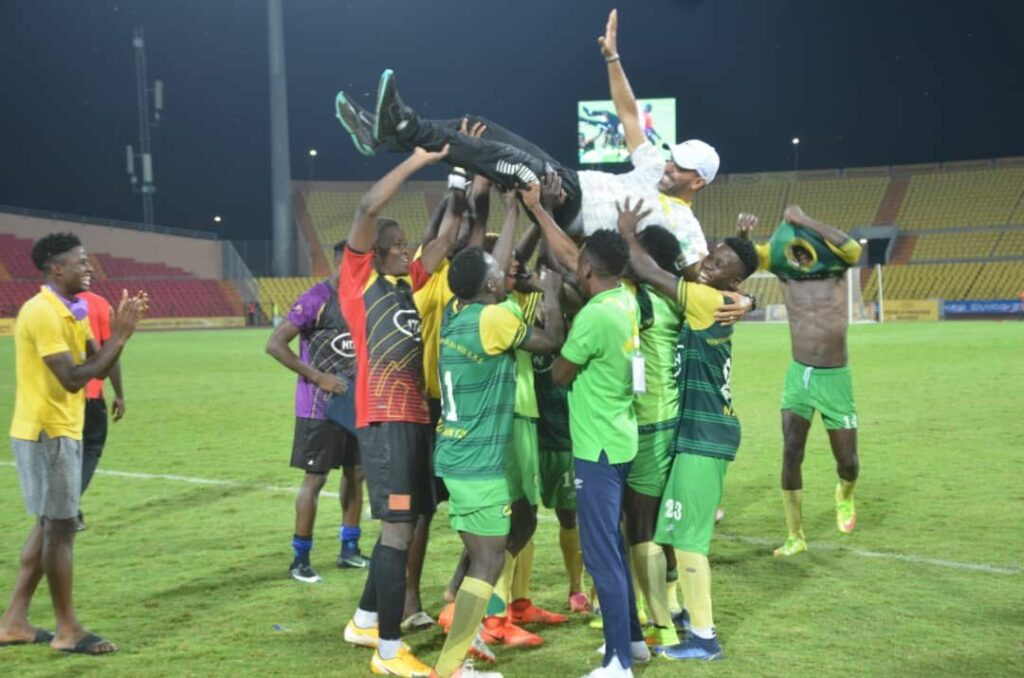 The players know who they have to thank for remaining in MTN Elite One: their coach Ahmed ADEL and therefore celebrate him duly.

It was already apparent in the main round: coach Ahmed ADEL was able to motivate his players well, although at times direct relegation to MTN Elite Two was threatened.

Panthere Sportive Nde FC have taken 11 out of a possible 15 points from the last five matches.
Even remaining in the league would have been possible if Panthere had not only playing drawn against RC Bafoussam, but won.

In the relegation match, Panthere was the slightly better team. A major mistake by the goalkeeper in the 48th minute was used by Panthere to make it 1-0. The 1-0 was ultimately the end of the match.

The season ended happily for our two players Jean-Marie EBODE and Marc ESSONO.
We wish both players a good and successful 22/23 season at Panthere Sportive Nde FC.

Congratulations to coach Ahmed ADEL on the great job of keeping Panthere Sportive Nde FC from relegation.
We have heard that Ahmed ADEL is leaving both Panthere and Cameroon also a foreign coach would have done the league so well.

Unfortunately our player Mohamed NJUTAPVOUI has to start with his club Yafoo FC Yaounde in MTN Elite Two.
This is very unpleasant but the descent does not mean the end of the world.

For Mohamed, relegation to the 2nd division should be a challenge to do everything possible to train even harder so that he and his team can return to the 1st division as soon as possible.
Don’t hang your head and give up, but come out stronger from such a defeat and attack.
Mohamed owes it to himself and Yafoot FC Yaounde!

Wipe your mouth, roll up your sleeves and attack: this is the road to success.