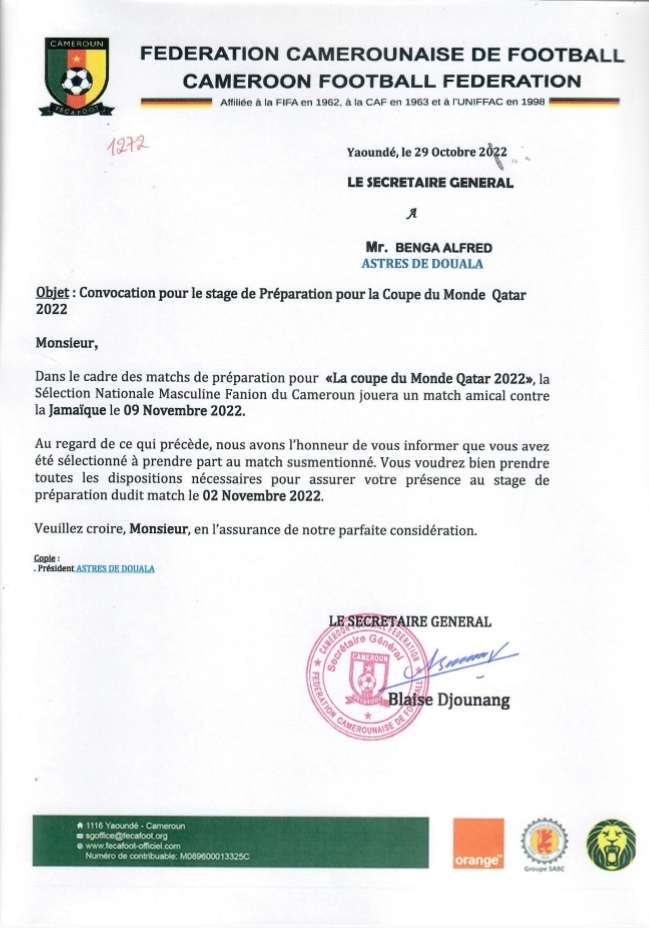 Fred Benga is invited by Rigobert Song to a course for local national players.

From November 2, 2022 to November 9, 2022, a preparatory course for the football World Cup in Qatar will take place in Yaoundé. Rigobert Song invited the national players who are currently playing in the MTN Elite One League in Cameroon to the course. Also attending will be Vincent Aboubakar, who plays for Al-Nassr FC in Saudi Arabia, and Léandre Tawamba, who also plays for Al-Taawoun FC in Saudi Arabia.

The course ends on November 9th with a friendly against Jamaica in Yaoundé.

But I assume that none of the players from the B team will be there in Qatar because coach Rigobert Song still sticks to the players who play in non-African leagues, even if they are leagues whose playing level is no better than the MTN Elite One.

There are many talented players in Cameroon, but they are not (yet) considered by the national team’s coaching staff.

From my point of view, the players Onana, Casteletto, Hongla, Zambo, Mbeumo, Aboubakar and Choupo-Moting form the backbone of the team at the moment. They are top performers in their club teams and almost all of them play in good European leagues.

Onana has developed very well since joining Inter Milan into a modern goalkeeper who not only excels on the line but also controls the penalty area much better than before. In addition, he is developing more and more into a modern “playing” goalkeeper.

Choupo-Moting is experiencing his second spring in the German Bundesliga at Bayern Munich after Lewandowski left Munich.

There is no need to comment on Aboubakar. For me he is the head, the good spirit, the leader of the team.

It would be good for the senior team to introduce younger players from the junior team around these players.

For example Fred Benga. Benga is a strong, disciplined right central defender. He impresses with his good positional play and his strong but fair duel behavior. Benga sees his well-positioned teammates and is able to open up the attacking game with his long passes. At the moment I don’t know of any player in the MTN Elite One whose long passes reach their own player more precisely than those from the right central defender of Les Astres FC Douala.

On his debut in June 2022 against the senior national team, he played 45 minutes and shone with his no-frills, clever, calm style of play.

The jump of Fred Benga and some other players from the MTN Elite One to the senior national team would be a great motivation for all local players and would certainly help to raise the playing level of the MTN Elite One.

I still have high hopes that FECAFOOT President Samuel Eto’o will do something in this direction in the future and that the senior national team will live up to their reputation of being the irrepressible lions they were in the 80’s .

I wish Rigobert Song, the team, FECAFOOT and the Cameroonian fans all the best at the World Cup in Qatar. I hope that the Cameroonian football team around Onana, Aboubakar and Choupo-Moting will represent the colours of Cameroon worthily, even if Brazil and Switzerland will be overwhelming opponents.

But the ball is round and anything is possible!